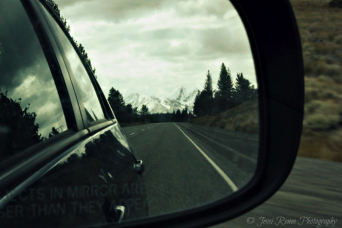 When a new year begins, everyone always says “To a new and better year!” and we optimistically think “This year will be great!” — but what if it is way worse than the year before?

I can’t say that 2013 was horrible; I have endured crazy things in my life that make me realize that 2013 wasn’t so bad, but 2013 made me grow in a way that I don’t think would have ever happened if certain things didn’t happen. The one thing that happened in 2013 didn’t even happen to me but to a family I know and I had the chance to bless them with a gift during this difficult time.

The year 2013 marked a year of a child (that I knew, that I cared for at church) passing away. She was only 3 and even though she suffered so much in this world with the ailments she had, it is never easy knowing a child has left us and never gets to experience life. I’m not even the mother of this child and yet it hit me hard; probably because I did know her and she was only a year and half younger than my daughter. As a way to help the family, they asked me to take pictures during her funeral. Now, there are a lot of photographers in Idaho and in our church and I felt — honored? humbled? scared? — I had a mixed amount of emotions when they asked because I knew how hard it was going to be and I didn’t want to let them down. A piece of me just wanted to say “No thanks” and walk away because it was such an important job and I didn’t feel worthy of the task. Pity Party, right? I had a good talk with my mom and she told me that there was a reason they asked me and that I need to take it — not for myself, but for them; to help any way I could since they were going through so much. I had to almost put myself in their shoes for a moment and just think as closely as I could on how they felt. I knew what I was thinking was nowhere near it, but it gave me a good idea on how to approach everything and how to handle it. It wasn’t just an ordinary job and I wasn’t going to treat it that way — I needed to approach it as personal moments being captured during a time in your life that you can never imagine.

As I took photos through out the day, I pretty much put a wall up so I could focus at the task at hand and not let my emotions get in the way. I took moments you probably would only see in movies and moments that to them were gifts. I can’t speak for the family, but I can only assume it was a way of processing everything and knowing God had bigger plans for not only them but for the child they just lost. It was still moments of glances they didn’t realize they had done or hugs and kisses that faded from their memory — it was a day of grief, celebration and over all praise to God. I realized though after I had finished, I felt empty. I don’t think I processed what just happened or what I had just witnessed, but I was in a catatonic state of just denial and confusion. It wasn’t until just hours later, the father contacted me and asked to do her burial which was only reserved for family. Again, I felt scared but honored for them to ask and I, of course, said yes. Little did I know though that this was going to be the defying moment for me; This was going to change my life to a point of no return.

I arrived to see just a handful of people and a pastor from our church. Burial was short and sweet; even released balloons in her honor. It was a beautiful blue sky day and clearly God was shining through. At the end, I tucked my camera away and sneaked passed the family and approached the little girls casket, which just happened to be open, and I looked at her. I mean I really looked at her. It wasn’t until now that I realized this was the little girl who I played with at church; the little girl who sat on my lap as we listened to story-time; the little girl who had a personality larger than life — and she was gone. I touched her hair and broke down right there. I couldn’t imagine that she was never going to wake up and I just didn’t understand anything at that point. I remember even thinking “Why Lord?” as I cried. Than at that moment I felt a hand on my shoulder and I looked and it was her mother and she hugged me. We talked a bit on how she was at church and we laughed and cried together. It was a moment I don’t believe I will ever forget and realize just maybe why things happen.

God doesn’t do this to punish us. In fact, it’s really not him at all. Our world is so corrupted and free will is in such control, God doesn’t have a choice. God does however gives us lessons. Things happen in our lives not to bring us down but to teach us and to teach others; even to help others. We can’t do anything alone, especially in this world, and we must stand together and worship God on who he is and what he stands for — Love. As much as it hurts us here on earth, we must smile and rejoice that Little Girl is up in heaven, dancing, singing, running, and pain-free. I can’t ask for a better gift than that. Days are hard, we are human and can be sad, especially for the family; but knowing her short life was meant for a bigger purpose in God’s plan, how can we be sad about that?

When the year was near ending, I had more personal issues come about that I became depressed and angry and had no hope that things will get better. I just think about that day at the burial when I got to share in such a personal and life changing moment for a family and I realize that my problems are fixable and/or can be replaced. It’s not an ending for me; everything is a beginning for something. We may not know what God’s plan is for us, our ideas may never be on the same page as him but he always knows best, no matter how much it hurts. He has our best interest at heart and he will never fail.

So where does this lead? It all leads to HIM. How lucky I am to be loved by such an amazing God? That after a lot of trials and tribulations, he has never let me down. My life isn’t perfect and it may never be, but as long as I have faith in his wisdom and his plan than I can’t fail because I have him by my side and I must have patience that his plan will happen and will succeed.

2 thoughts on “Where does it lead?”